skip to main | skip to sidebar

The cloud has evolved from the managed hosting concept. With data centers like EC-2 making it easier to provision servers on-demand, elasticity can be build into the application to scale dynamically. Microsoft Azure provides a similar, and nicely integrated, platform for the Windows application world. But how well do this clouds hold up when demand is elastic for compute intensive workloads? The short of it? Not so well.

I found two papers that report on experiments that take Amazon EC-2 as IT fabric and deploy compute intensive workloads on them. They compare these results to the performance obtained from on-premise clusters that include best-known practices for compute intensive workloads. The first paper uses the NAS benchmarks to get a broad sampling of high-performance computing workloads on the EC-2 cloud. They use the high-performance instances of Amazon and compare them to similar processor gear in a cluster at NCSA. The IT gear details are shown in the following table:

Clearly, when the workload is confined to a single server the difference between the two compute environments is limited to the virtualization technology used and effective available memory. In this experiment the difference between Amazon EC-2 and a best-known practice cluster is between 10-20% in favor of a non-virtualized server.

However, when the workload needs to reach across the network to other servers to complete its task the performance difference is striking, as is shown in the following figure. 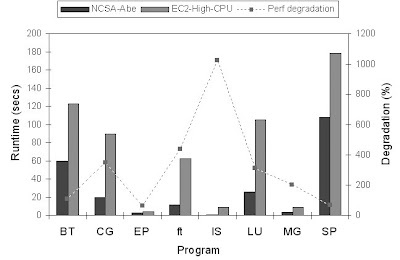 The performance difference ranges from 2x to 10x in favor of a optimized high-performance cluster. Effectively, Amazon is ten times more expensive to operate than if you had your own optimized equipment.

The second paper talks to the cost adder of using cloud computing IT infrastructure for compute intensive workloads. In this experiment, they use a common workload to measure the performance of a supercomputer, HPL, which is an acronym for High Performance LINPACK. HPL is relatively kind to a cluster in the sense that it does not tax the interconnect bandwidth/latency much as compared to other compute intensive workloads such as optimization, information retrieval, or web indexing. The experiment measures the average floating point operations (FLOPS) obtained divided by the average compute time used. This experiments shows an exponential decrease in performance with respect to dollar cost of the clusters. This implies that if we double the cluster size the FLOPS/sec for money spent does down.

The first paper has a wonderful graph that explains what is causing this weak scaling result. 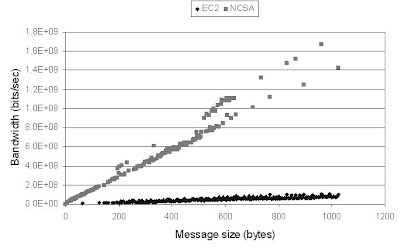 This figure shows the bisection bandwidth of the Amazon EC-2 cluster and that of a best-known practice HPC cluster. Bisection bandwidth is the bandwidth between two equal parts of a cluster. It is a measure how well-connected all the servers are to one another. The focus of typical clouds to provide a productive and high margin service pushes them into IT architectures that do not favor interconnect bandwidth between servers. Many clouds are commodity servers connected to a SAN and the bandwidth is allocated to that path, not to bandwidth between servers. And that is opposite to what high performance clusters for compute intensive workloads have evolved to.

This means that for the enterprise class problems, were efficiency of IT equipment is a differentiator to solve the problems at hand, cloud IT infrastructure solutions are not well matched yet. However, for SMBs that are seeking mostly elasticity and on-demand use, cloud solutions still work since there are still monetary benefits to be extracted from deploying compute intensive workloads on Amazon or other clouds.
Posted by Theodore Omtzigt at 7:01 AM 2 comments: